Satellites, balloons, ships, airplanes and countless weather stations – the data pool for forecasts has grown enormously. This results in highly complex weather models that are analysed by powerful computers. And this benefits agriculture too. Hans Helmut Schmitt from the German Weather Service in Offenbach knows more.

The old folk sayings bear eloquent witness: hardly any other economic sector is as dependent on the weather as agriculture. What role does weather forecasting play today?

Fundamentally nothing has changed. Even today, the effects of weather still cause greater differences in harvests than all other crop engineering measures combined, including soil quality. And now we have climate change making the whole thing even more difficult!

Looking at the sky isn't enough. What resources and technologies are available to meteorology?

The most important thing is still to capture the initial situation as accurately as possible. This task is increasingly being performed by weather machines around the world. There are currently around 11,000 land stations and almost 1,000 water buoys that record the weather every hour and feed the data into the worldwide data networks. In addition, there are reports from ships and aircraft. Satellite imagery is becoming more and more important. The beauty of exchanging data is that there are no political borders; weather flows across borders. In this respect, everyone is dependent on everyone else and international cooperation works.

What data does modern weather forecasting use and how does it create a "weather model"?

Mainframe computers use the initial data to calculate future trends. There are countless weather models that are very similar in their basic physical principle, but often adapted and optimised to the region of the country where they were developed. In a model, a three-dimensional grid is laid over the Earth's surface and in up to 90 layers up to a height of 75 km into the atmosphere. The future trend is predicted in small time steps for each grid point. It requires a lot of computing power. The computer of the German Weather Service, for example, consumes so much electricity that it costs about one million euros per month to run.

However, a serious weather forecast does not cover more than a few days. However, there are usually a few months between sowing and harvesting. How useful are long-term forecasts?

Because the initial situation can never be precisely determined, small errors quickly grow into big ones: small cause – big effect. The limit for acceptable forecasts in Central Europe – depending on the season and also with slight regional differences – is around ten days. Anything beyond that is more or less statistics. But there are now also four-week or seasonal forecasts. But we do not distribute these to the general public for good reason. They rather reflect a trend based on probabilities, but they are not concrete predictions.

Do you noticing climatic changes?

What does this mean for plant growth?

First of all, milder winters will result in the growing season starting earlier. If we compare the average beginning of plant growth in the last 60 years, for example the flowering of the hazelnut, in the period 1991-2017 it begins two and a half weeks earlier than in the comparable period 1961-1990. This head start lasts for the whole year. However, since the start of winter vegetation dormancy (determined by the leaf fall of the English oak) has hardly changed, this means the growing season is about 17 days longer. This opens up a wide range of opportunities for the selection of varieties and crops. In the meantime, crops that had previously been more native to the Mediterranean region are now ripening in Germany. This is particularly noticeable in viticulture, where more and more grape varieties originally from France are being planted in the classic wine-growing regions of Germany. At the same time, vines are increasingly being planted in northern regions as well, a crop that is known for needing warmth. There is a vineyard on the island of Sylt, Germany, and a quite passable wine is grown in the south of England.

Are there also negative consequences of warming?

One major problem with the early start of crop growth is that the danger from late frosts increases. For example, if fruit trees blossom earlier, they are at a very sensitive stage of growth during any mid-April frost, which can never be completely ruled out even in the age of climate change. 2017 with its – in some cases – devastating frost damage is one reminder.

How can farmers adapt?

Initially, there is not much you can be do about early growth. However, as we saw 2017, an investment in anti-frost systems can make a lot of sense. In the "Altes Land" fruit-growing region around Hamburg, Germany, for example, there was hardly any frost damage because anti-frost spraying has been practised on a large scale for years. Basically, however, earlier and longer growth is an advantage if the right crops are cultivated or the right varieties are used. In areas with an early grain harvest, there may even be a second harvest with catch crops – a phenomenon currently more familiar from the tropics.

Can you tell us more about the weather phenomena that we might see in the future?

Besides the weather extremes that are still to be feared, we anticipate a problem in the increasing demand for water. In general, annual precipitation is increasing slightly. However, this increase mainly occurs in winter, while springs are becoming drier. In summer and autumn we observe large variations from year to year, sometimes even during the growing season. Overall, the amount of rain remains largely unchanged during the warm months of the year, but the proportion of showers and thunderstorms (in technical jargon we call these "convective events") is increasing. These heavy rainfalls can be observed in the rain gauges and consequently also in the precipitation statistics. However, they only plants to a certain extent; much of the rain flows off superficially and even leads to erosion damage. However, due to the earlier start to the growing season and the warmer summers, plants' evaporation potential increases. It is therefore important to store the rainwater that falls in winter and to keep it available to plants for as long as possible.

What does this mean for agriculture? Does this mean that we will be harvesting tropical fruits in Central Europe at some point?

Essentially we are already on this path today – I already mentioned the example of wine. I think it unlikely that one day there will be pineapples from Bavaria, as the "BayWa Saatpost" magazine claimed after the hot summer of 2003. But the trend is clearly in the direction of crops that prefer the warm. But then we must also solve the problems that Mediterranean countries are increasingly facing. Specifically, we must ensure an adequate water supply. Anyone who has ever seen the water reservoirs in these countries, all too often barely full, knows what is coming to the Mediterranean region – and possibly also to us next!

land stations and almost 1,000 water buoys record the weather every hour and feed the results into the global data networks. 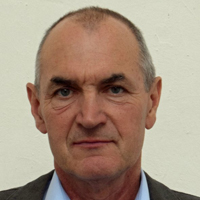 After training as a meteorologist, Hans Helmut Schmitt worked at the Geisenheim/Rheingau, Germany, branch of the German Weather Service from 1978 to 2014. His focus was on agrometeorological consulting, in particular for fruit and wine growing. At the same time, from 1992 to 2013, he lectured at the Geisenheim University of Applied Sciences on agrometeorology, agrometeorological measurement technology and climatology. Since 2014, Hans Helmut Schmitt has worked at the head office of the German Weather Service in Offenbach, where he heads the consulting department.

Subscribe to our email newsletter and never miss anything again!

„Even today, the effects of weather still cause greater differences in harvests than all other crop engineering measures combined.“
−Hans Helmut Schmitt−

On our Way to Agriculture 4.0